The “green girl” is Ruth. Ruth is an American in London who works as a temporary perfume saleperson in a department store she disparagingly calls Horrids. The narrator both admires Ruth and envies her youth, comparing Ruth’s “perfect French breats” to her “maternal and massive and saggy” breasts. It is difficult to tell exactly who the narrator is, but she takes some delight in Ruth’s sufferings. When Ruth spills the contents of her purse:

She is such a trainwreck. But that’s why we like to watch. The spectacle of the unstable girl-woman. Look at her losing it in public.

The novel, particularly in the beginning, consists in many ways with the more materialistic/hedonistic preoccupations of this particular type of young woman: clothes, shoes, hair, and casual romantic encounters with men. These are all things with which she is trying to fill a void in her life. Perhaps a little black dress will do it:

She hardly has enough money to eat. But who needs to eat when you can wear a dress like that? Ruth thinks. Anyway, food gets digested, food goes away. Useless practice. But a dress like that will be forever. A sort of spiritual nourishment, just as fundamanetal as eat and roof and breathe.

Zambreno excellently conveys the light veneer Ruth presents to the public. Beneath, she is empty and searching and longing. Of course, she goes about solving her loneliness and emptiness in ways entirely inappropriate and ineffective. Her friend and roommate Agnes is no help, usually encouraging the worst of her impulses.

There may be more than a little debt to films like The Devil Wears Prada:

Wisdom is not something the green girl possesses in abundance. Her sacred scriptures are new wave films and fashion magazines.

Ruth lacks depth. The narrator notes this explicitly at least once. As her temporary jobs indicate, she has not found a way to fit in the world. She longs for her lost love, she has a crush on a co-worker, and she is effectively estranged from her distant father. 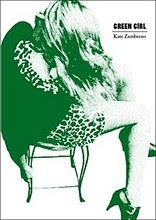 Early in the novel, I had high hopes. The fashion-oriented aspects were not particularly appealing, but Zambreno managed to keep them interesting and relevant, such as with a designer knock-off purse: “up close one realizes the purse’s secret, the humiliation of its anonymity.” Ruth, too, is humiliated by her anonymity and, in fact, seems to crave more humiliation. The narrator enjoys Ruth’s sufferings as much as Ruth herself finds pleasure wallowing in self-pity and, perhaps manufactured, lovesickness.

There are some romantic movements of plot, but little else other than some wandering and job changes. For me, with fashion and hookups doing most of the work of plot, the novel lost its way. I became disengaged and felt removed from Ruth by the end. The narrator played a part by observing Ruth almost as a specimen rather than a person. The shopping and preoccupation with clothes did not help either. I lost the thread. I would say the end was disappointing, but the story had unraveled to the point I was no longer invested in the outcome. The novel very nearly evaporated.

As a TOB contender, I cannot imagine Green Girl taking down The Marriage Plot. With all its flaws, Eugenides’ work never has the reader doubting the skill of its seasoned author. Zambreno either was attempting something I was too dull to follow or was overpowered in the struggle with her book. Whatever the case, I do not think I will be alone in assessing The Marriage Plot as both more ambitious and more successful. I wish Green Girl much success, but I doubt it will find any in the Tournament of Books.