The Sense of an Ending by Julian Barnes

Kevin from Canada aptly calls this “a memory book.” As with The Last Brother, our narrator is an old man, reasonably well-situated in life who is looking back as, at his age, that’s where most of the action is. In both books, the narrator struggles to make sense of the past (hence the title on this one), but Barnes is a bit more interesting. The unfolding of events in The Last Brother are a mystery to the reader, but the narrator knows all the pertinent details. Raj tells his story, struggles with it emotionally, but he knows as much of the story at the beginning as we will by the end. 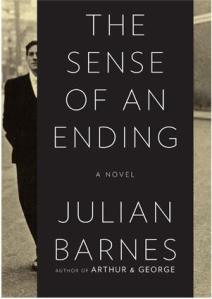 In Barnes’ Booker-winning novel, Tony Webster is as ignorant as the reader regarding crucial facts. This hole in Tony’s memory-knitted past gives his story intrigue in addition to the foreboding and urgency created where the narrator knows but the reader does not. The technique also allows Barnes to delve deeper into the human experience than, say, Appanah does in The Last Brother. While emotions run quite high in The Sense of an Ending and are important, emotions are not the primary theme. The theme is the interplay of memory and the construction of a life narrative.

In this aspect, the work reminded me most of The Underpainter, Urquhart’s outstanding, Governor General’s Award-winning novel. The narrator is flawed and, only belatedly, comes to realize how deeply flawed he is.

Despite this similarity of theme, The Underpainter and The Sense of an Ending they do not till the same soil. The two novels engage in very perceptive examinations of slightly different facets of the life as narrative theme. Importantly, Austin Fraser from The Underpainter had a single-minded focus on his passion, his art. His troubles reconciling the past stem from that focus. Tony Webster’s problems stem from turning inward. He has not pursued any great passion, he hasn’t the excuse of art. Rather, he erred by turning inward, by paying too close attention to the story of his life.

That is not to say that events primarily happen to him, as in The Last Brother. Tony has actively participated in shaping the past that looms so importantly in his present. The difference in the three approaches is vital to understanding what separates Barnes’ and Urquhart’s novels from Appanah’s. The Sense of an Ending and The Underpainter are attempts to capture how we reconcile altered emotions and/or revelatory facts with the fiction of our lives. Even acknowledging the extent to which our remembered pasts are fiction shakes something central in us. The Last Brother, by contrast, is more like history, biography, fact; the book reveals facts that cannot change and, in important ways, could not have been changed.

Part of this disconnect is that The Last Brother involved a nine-year old. Mistakes by our nine-year old selves are, mostly, easily forgivable. Even where we might have trouble forgiving ourselves, others generally do not. Children are simply not sufficiently developed at that age to have the same culpability for their actions adults have. Beyond that, it is not clear that any different choices by Raj would have changed any of the tragedies that befell him and those around him.

Tony was a man, though, and he made choices. This is not to say that the book is interesting because Tony can be judged for his errors. The theme, again, is memory and how we tell stories about ourselves to ourselves. While there is narrative pull in finding out what happened, the truly engaging aspect of the novel is the examination of the pillars of our self-image, and what happens if those pillars crumble.

For years you survive with the same loops, the same facts and the same emotions. I press a button marked Adrian or Veronica, the tape runs, the usual stuff spools out. The events reconfirm the emotions…and vice versa. There seems no way of accessing anything else; the case is closed. Which is why you seek corroboration, even if it turns out to be contradiction. But what if, even at a late stage, your emotions relating to those long-ago events and people change?

Taking the statement as a logical proposition, if the emotions associated with the events change, the events must be reconsidered, altered. The life we remember is not, after all, the life we have lived. A new narrative must patch the rip in the fabric formerly weaving emotion and events together. Barnes masterfully explores this reconciliation in ways that I have not quite seen before. As I said, The Underpainter comes closest (and is in some ways better), but Barnes has moved the stakes of the subject outward a smidge.

This book will be formidable in the TOB 2012 brackets. It earned its top seed and should live up to it. I have a hard time imagining anything other than another one-seed or The Tiger’s Wife keeping it out of the pre-Zombie final four. The book is too good, the characters too strong, too real, for some other book to sneak an early-round victory. I love the book and I like its chances.

21 Responses to The Sense of an Ending by Julian Barnes