My excuse for picking out this book was that I was searching for something my significant other, who likes crime and thrillers and Germany, might enjoy. This is a detective thriller from Germany. But, having been wrong before to rely on mere signposts rather than evidence, I chose to read it before gifting it. 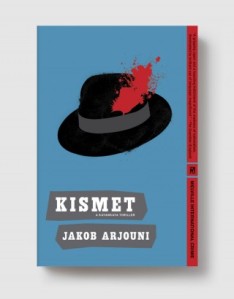 Alas, the book was not one I would gift. I have relayed the basics (German, crime, thriller) to my one and only, she can choose to read it or not. I am not vested nor am I risking my credibility as a book recommender. The last time I tried this (vetting before wrapping a potentially gift-worthy detective novel) the novel also failed to grip me, so no gift. My ambivalence in making her aware of that one proved wise. She abandoned it. She will probably make it through this one, if she tries it. Still, I am done scavenging for recent release detective fiction that, in some way, can be linked to the literary.

The story begins with protagonist Kemal Kayankaya and a gentleman named Slibusky “crammed into the china cupboard, emptied for the purpose, of a small Brazilian restaurant on the outskirts of the Frankfurt railway station district, waiting for a couple of racketeers to show up demanding protection money.” Kayankaya wise-cracks his way through the wait to the confrontation, noting Siblusky’s smell and the ridiculousness of two grown men hiding in a china cabinet.

This small job, which Kayankaya assumed would require only scaring a couple of low-level punks, turns into something much bigger. The Frankfurt mafia/gang scene soon becomes the focus of Kayankaya’s single-detective agency.

The reason I am not a good reader of this type of crime thriller is that I find jarring the deux ex machina of an author who noticeably intrudes in the story to save his protagonist from that protagonist’s own incredibly bad and entirely unlikely decisions.

A momentary digression: I love The Usual Suspects in which Verbal tells the police detective a tale about an elusive and sinister man named Keyser Soze. Verbal has been arrested, he has to convince the police that he is more victim than perpetrator. In other words, he did not walk into the police station just for kicks, to see what would happen. Moreover, he escapes by his own sharp wits rather than the convenient dullness of his would-be murderers.

Kayankaya’s thought process seems to be: “What is the course of action most likely to end with my body being discreetly disposed of by powerful criminal organizations who do not hesitate to chop off the fingers of shopowners or start gun battles in the streets? Then I will do that and hope for the best.” Of course, with the author on his side, the best usually happens, in the long run. There are, I am told, four of these. I won’t be verifying the claim.

It is interesting (dismaying?) to me that German audiences are, apparently, as immune to ridiculousness in plots as are Americans. Though the thriller does seem to provide a glimpse into modern German culture, I am sure Jenny Erpenbeck, Martin Walser, Eva Menasse, or any number of other contemporary authors provide a more nuanced and insightful depiction of German life. For that matter, I am still slow getting to Thomas Mann and his Magic Mountain. (Footnote to self: Significant dread at tackling the monster suggests Rat’s Chance in Hell Challenge.)

Kismet uncovered for me pitfalls several book-selection pitfalls to which, it appears, I am not immune. First, relying solely on the translator (the esteemed Anthea Bell) is insufficient for ensuring that a particular translated work will match your or a beloved’s taste. Second, that a particular publisher (the also esteemed Melville House) prints the book does not mean, again, that you and the novel will run through flowered fields holding hands. Third, when you know you tend not to find a particular genre satisfying, do not keep blasted trying with unknown, unproven books/authors. Instead of reading books that I know I likely won’t love but hope my intended giftee might like, I should gift books that I love and that she might like. I will let her recommend to me those books from her favorite genre that she loves. Passing mediocre books back and forth would be idiocy. Luckily, I am the only idiot in the house.

So, I did not fall in love with the book. If you do not mind a few absurdly irrational choices by your protagonist for the purpose of an adrenaline rush, then this could be up your alley. For a more positive, less curmudgeonly review, there is always the Washington Post (very possibly to blame for putting this on my radar…though I kept thinking it was a blogger in my sidebar, it wasn’t) or The Independent. Better though, try a blogger who gives a nice, objective overview of the entire series, highlighting both the positives and the negatives.

This entry was posted on Friday, November 11th, 2011 at 12:58 pm and is filed under 2010, 2010s, Arjouni Jakob, Translations. You can follow any responses to this entry through the RSS 2.0 feed. You can leave a response, or trackback from your own site.

11 Responses to Kismet by Jakob Arjouni