This “comic” novel does not do itself any favors on page three. The first page contains only the title in all caps. It is horizontally centered and near the top of the page, but not too close to the top. This first page gives the feeling that you are in the hands of a professional, at least in the typesetting and layout department. The second page does nothing to dampen one’s spirits. The page is blank. A little breather after such a nicely displayed title is actually welcome. But then page three starts the story and, presumably, the comedy.

The chapter is titled “Do Not Go Gentle.” Okay, this brings up a pet peeve of mine. “Gentle” is really an adverb here, as it modifies “do go” and, therefore, it should be “gently” giving: “Do Not Go Gently.” This reminds me of Dirk Gently, a lead character for Douglas Adams. Maybe that is why that last word was changed to “gentle.” Or, it could be, that it is sort of like “do not go soft” meaning do not become soft. This theory is quickly blown away when the first sentence of Lenny’s diary concludes:

I am never going to die.

Lenny does not want to go gently. 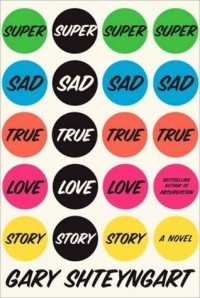 Titles are minor. If you have been following the Tournament of Books, you will know that page three (misreported as page one) contains another turnoff. Lenny it turns out is on a plane from Rome to America. Who owns the jet? UnitedContinentalDeltamerican. Yep, it’s the old corporate conglomerate gag where you make fun of things like Time Warner which was a merger of, get this, Warner Communications, Inc. and Time, Inc. (and, technically, the assets of Turner Broadcasting System, Inc. which sort of kills the gag because it was not named Time Warner Turner; see also Viacom). This suggested to me that the book was going to be unfunny. Shteyngart presumably expected a different reaction as he uses the same shtick several more times in the novel, giving us things like AlliedWasteCVSCitigroup.

But wait, like a bad infomercial, there is more. On page three. Actually, that’s almost a quote except for the quip about the infomercial and the lack of a contraction. That’s not the bad part. The bad part is this:

We don’t die because our progeny lives on! The ritual passing of DNA, Mama’s corksrew curls, his granddaddy’s lower lip, ah buh-lieve thuh chil’ren ah our future. I’m quoting here from “The Greatest Love of All,” by 1980s pop diva Whitney Houston, track nine of her eponymous first LP.

The problem is not that this sentiment is insufficiently vacuous to warrant being satirized. It is. Shteyngart’s error is tap dancing along the lines of racial stereotypes (“chil’ren” and all) apparently for laughs. If she actually sang it as “quoted”, accuracy constitutes a defense. But she doesn’t. She ennunciates quite well, in fact. I know both because (a) I bought the album on cassette when it came out and (b) I just finished listening to it again to be sure I did not misremember. Alone, this means nothing. I may be hyper-sensitive, but it made me wary of further similar missteps. (And, again, this seemed sufficiently funny to the author to keep it up for another page; the bit continues on page four: “But what ah our chil’ren?”)

So, by the first page of story, I have at least two warnings that this book will occasionally be unfunny and, sometimes, offensively so. Shteyngart and I are off to a good start.

Lenny recently has met and fallen for Eunice Park. Eunice is a beautiful young woman while Lenny is 5′ 9”, 160 lbs balding man with a “gray, sunken battleship of a face.” Lenny’s sole means of attracting Eunice, a constant spender, is his financial prowess. This exploitative May-September relationship is the “love” part of the story. Arguably, it is also the “sad” part and the “true” part too.

Eunice is an American whose parents emigrated from Korea. The second chapter contains messages from “the Globalteens account of Eunice Park.” The title is: “Sometimes Life is Suck”. Eunice’s mother warns her to study and that boy’s are “extra.” The stereotype is not only of a Korean immigrant speaking poor English, but also of a mother who must secretly tell her daughter that she loves her because the father wants only to push her to strive for excellence. Shteyngart seems to be equal opportunity when it comes to having fun with ethnicity. Equality is good. But that first “quote” already had me wary, so any comedy was lost on me.

The thing about Shteyngart’s playing with stereotypes is that it saps some of his satire of any power. When he satirizes others’ playing off stereotypes, the wry knowingness that could lead to a chuckle is gone, or was for me, because I no longer fully trusted Shteyngart with this material. It is hard to effectively poke fun at something you are doing yourself. An example is the CGI critter, named Jeffrey Otter, which pops up on Lenny’s apparat to ask customs-type questions when he is re-entering the United States. (An apparat, by the way, is an umpteenth generation smartphone. Lenny starts out with an “old” apparat, an iPhone…hahaha…ha. Sigh. Good times.) Jeffrey Otter changes costumes, accents, and so forth depending on the expected audience. Sometimes he wears a sombrero, other times he calls Lenny “pa’dner”, that sort of thing. It seemed too easy and, particularly when Shteyngart was already playing the same sort of stereotypes for laughs, questionable at whom Shteyngart expected the reader to be laughing.

Super Sad True Love Story is a story. It is told partly through Lenny’s diary and partly through e-mail, text messages, and phone conversations, many of which do not include Lenny as a party, though often as a subject. The e-mail exchanged between Eunice Park and others in her age group sound plausibly realistic. An example:

Sup, slut? I really wish you were here right now. I need someone to verbal with and Teens just ain’t cutting it. I’m so confused. I went up to Lucca with Ben (the Credit guy) and he was super nice, paid for all my meals and this gorgeous hotel room, took me for a walk around the city walls and to this insanely good osteria where everyone there knew him and we had a 200 euro wine. I kept thinking about how he would be the perfect boyfriend and I sweated his hot skinny bod. But all of a sudden I would tell him like for no reason that his feet smelled or that he was cross-eyed or his hair was receding (which was a total LIE), and he would get all intro on me, turn down the community access on his apparat so that I wouldn’t know where the fuck his mind was, and then just stare off into space. It’s not like we didn’t do it. We did. And it was all right. But right afterwards I started having this major bawling panic attack and he tried to comfort me, told me I looked slutty and that my Fuckability was 800+ (which it’s so NOT, because I can’t find anyone in Rome who can do Asian hair) but he couldn’t. I feel so much shame.

The downside of the realism is that, to the extent it sounds like teens or early twenty-something girls with empty heads, the e-mail is best skimmed for exposition (the reason they are included in the first place).

I am obviously grumpy. If you were not turned off by the page three humor, then you might enjoy the very detailed world-building that Shteyngart has undertaken. His Rome and New York, mostly New York, is recognizably unrecognizable. The Chinese own most of the United States. As the quote above indicates, everyone’s train of thought is available to the world unless you “turn down the community access” on your apparat. This is a world of little privacy and a disintegrating United States of America. Self-worth is based primarily on fuckability and credit ratings. Large conglomerates have taken over major aspects of security operations both within and without the United States and those conglomerates cut deals with both the American government and foreign governments to maximize their profits.

Shteyngart never drops the ball in maintaining the consistency of this alternate universe or in providing a feel for what it is like to be a member of the upper-middle class in the SSTLS world. I have little doubt that most of his vision made it onto the page. This is an achievement even if I did not find it terribly fun. I also had trouble caring about the characters. In significant part, that is because his characters had little depth of feeling for each other. They were incredibly shallow.

Lenny plays Humbert Humbert to Eunice’s Lolita. He worships the roughly two decades younger Eunice for her beauty and condescends to her because she is young and shallow. Depending on the circumstances, he treats her as either a sex doll or a child who needs his protection. Essentially, he projects onto her what he needs her to be. Meanwhile, Eunice is a sexual striver. She uses her sexuality to attract the highest credit rating she can find in a surrogate father.

The primary hope ought to be that both Lenny and Eunice mature and find someone more compatible. Lenny is too taken with both Eunice’s physical attractiveness and her need for a protector to let the relationship go. Eunice seems more likely to leave, but won’t unless she can find a bigger yuan-pegged financial portfolio. There is little love in this love story and none of it true.

Lenny also has professional worries. He is a salesman in the life extension business. The plan for not dying is to earn enough to buy some of his company’s treatments. It is a nice little irony that Lenny cannot afford the thing he is desperate both to sell and to have. The obstacles to success are two-fold. First, Lenny is not a great salesman. Second, the world is falling apart. Between the plots to kill his friends, the riots in Tompkins Park, and the collapse of the American economy, Lenny will seem lucky to hold onto enough to keep Eunice and a roof over his head. Unfortunately, I was not very interested to find out whether he managed a win in any area of his life.

If the starter jokes were funnier to you than to me, there is much in this book you will like and you will probably be more open to emotional engagement with the characters. SSTLS and I tripped over each other out of the gate and never regained our balance. I was probably looking for things not to like after page three. I certainly found such things. This is a book for a particular audience. I am not in it.