Who Has Seen the Wind by W.O. Mitchell

Jim Burden is one of the great narrators in literature. As a big city attorney, he recounts the story of growing up on the plains of Nebraska with Àntonia Shimerda. Jim’s Virginia parents have died, leaving his Nebraskan grandparents the responsibility of raising a ten-year old boy. Jim arrives in Black Hawk, Nebraska on a train also carrying the Shimerdas. The beauty of this initial connection between Jim and Àntonia, four years his elder, is a beautiful part of the overall structure of Cather’s first “masterpiece.” The star, of course, is not Jim, but Àntonia who, even after losing her youthful beauty, has “that something which fires the imagination” and which can “stop one’s breath for a moment by a look or a gesture that somehow reveal[s] the meaning of common things.” Cather does not just tell us this. Throughout My Àntonia, she demonstrates this fact in brilliantly conceived vignettes. As counterweight (or alter ego) to the brilliant Àntonia, Cather gives us the equally compelling prairie of the western United States. 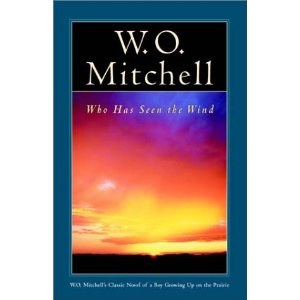 Cather’s concluding novel in her “prairie trilogy” was, as much as anything else, “a sort of love story of the country”, as her friend Edith Lewis described it.

W.O. Mitchell brought his equally intense passion for the Canadian prairie to Who Has Seen the Wind. The novel is set several decades later, in the 1930s and, in place of Jim Burden, Mitchell provides Brian O’Connal, a precocious menace and the protagonist. However, Brian does not narrate the book from the perspective of age as does Jim. In fact, Brian does not narrate at all, but is merely the character over whose shoulder we initially, and most often, peer.

Brian at the moment was in the breakfast-room. He sat under the table at the window, imagining himself an ant deep in a dark cave. Ants, he decided, saw things tiny and grass-coloured, and his father and mother would never know about it. He hated his mother and his father and his grandmother for spending so much time with the baby, for making it a blanket tent and none for him. Not that he cared; he needed no one to play with him now that he was an ant. He was a smart ant.

Brian’s brother is deathly sick, but Brian is too young to understand or care. He demonstrates his spunk and intelligence with his wild imaginings and mischief. Of course, in the mold of Dennis and Calvin, this little menace has a heart of gold. On one of his early adventures, he goes in search of God, but finds only the pastor’s wife. She demurs to his questions, suggesting that he really needs to talk to the pastor himself. Brian, whose father is a druggist, walks back through town, stopping on the edge to watch a boy from the prairie, Young Ben, walk across the landscape.

For one moment no wind stirred. A butterfly went pelting past.

God, Brian decided, must be very fond of the boy’s prairie.

Brian does meet the pastor, Hislop, and so impresses with his questions and curiosity that, later, the Hislop’s faith is “renewed” when he recalls the conversation. In the early going, this novel veers dangerously close to sentimentalism. Hislop’s renewed faith is again challenged when his parishioners revolt. The headmaster of the town’s school, Digby, is the pastor’s best friend. Hislop confides to Digby the troubles he has with the church elders.

He went to the window again. “Right now,” he said with his back to Digby, “I can think of only one believer in the town.”

Digby got up from his chair; he went over to Hislop and put his arm over the minister’s shoulder.

The two stood silently side by side looking out at the rain.

Well, perhaps, it does more than veer. However, the religious mawkishness is saved by a puppy. Brian is not merely the sole inspiration for Hislop, he is a boy with a dog. I have a weakness for “boy with dog” stories. The weakness is pathological. Write a story about a boy playing with a puppy and I will soon be simpering like a fool. Big Red, Old Yeller, Sounder, and Where the Red Fern Grows can make my heart pound and my eyes well just by recalling their covers. Recalling the content constricts my throat. It is altogether pathetic. But Brian gets a puppy and I was pleased.

I was as disappointed as he was when the fox terrier proves too rambunctious to coexist with the grandmother and is sent to the garage to sleep. As anyone who has been a boy with a dog knows, this is hard to handle. Brian wanders out into the night to sleep with the poor thing and his parents panic upon realizing he is not in bed. Of course, the first place anyone who has read the foregoing “boy with dog” books would look for a boy would be with his dog. Duh. Oddly, the search party canvasses the town before turning, at last, to the garage where the policeman finds “Brian and the dog asleep on the floor.”

The story progresses more slowly than My Àntonia. Brian does not, as does Jim, grow up, leave the prairie and return years later. Instead, the book is all about Brian’s childhood and life in a small town on the prairie. This last point is important. Mitchell spends more time examining small town life, including the intrigues of Hislop, Digby, the school teachers, and the local moonshiner, than examining prairie life itself. Where Jim and Àntonia spend a great deal of time on the prairie, the most memorable parts of this book take place in town.

The focus also shifts from Brian and his family to the religious, educational, and governmental leaders of the town. The adults have romances. People die. The primary movers in the town use Young Ben as a pawn in their efforts to gather a little more control of the local politics into their arms. As beautifully as Mitchell writes, I became a little distracted from the “prairie” aspects of the novel, though Mitchell does lyrically catalogue the beauty of the prairie. The shifting focus, from boy to adults and back to boy is where Mitchell suffers in the comparison with Cather.

The Young Ben is Mitchell’s Àntonia. The prairie is personified in these two characters. But where Cather manages, despite a more consistent perspective, to examine the fullness of Àntonia’s character, the Young Ben remains more an object than a subject. Àntonia is the prairie and Cather’s work is about Àntonia, completely about her. The Young Ben remains something of an enigma throughout, very nearly a sideshow to Brian’s life and the life of the town. Mitchell’s book lacks the same focus on its subject and, I suspect, will be less memorable as a result.

Be aware, this is praising with faint damnation. My Àntonia is consistently one of my “five favorite novels” of all time and Cather one of my most beloved authors. Due to my own prejudices, it is doubtful that I would ever find a prairie novel that I believed equalled Cather’s work, or even approached it. So, let me stop the contrasts and simply take Who Has Seen the Wind on its own terms.

The novel does evoke the prairie. Though I have spent very little time, outside of Cather novels and Laura Ingall’s series, on the prairie, I feel as if I have. The prairie towns seem to have very similar concerns and lives, even decades apart. Life in rural areas can go for long stretches with seemingly little change. I need only visit my parents on the holidays to experience this. The continuum from Ingalls to Cather to Mitchell confirms this. But coming later does not mean Mitchell is redundant. He captures some of the same aspects, but even the similarities are welcome. Mitchell touchingly renders the prairie landscape in ways that remind me of those earlier works. Through his evocation, I can feel the wind, if I cannot quite see it.

Note: This book was part of my prize in a KfC-sponsored contest a few months ago. If you are not aware, he is running one as I type with entries closing October 3. Go get your entry in now.

This entry was posted on Tuesday, September 28th, 2010 at 6:00 am and is filed under 1940s, 1947, Children/Young Adult, Mitchell W.O.. You can follow any responses to this entry through the RSS 2.0 feed. You can leave a response, or trackback from your own site.

14 Responses to Who Has Seen the Wind by W.O. Mitchell